The reputation of AUT’s Sports Performance Research Institute lead Paul Goodman to travel to the other end of the world to undertake his PhD in post-concussion brain function.

Anyone in a competitive sports franchise will tell you that missing the playoffs is never part of the plan. But for Paul Goodman, Head Strength and Conditioning Coach for the Chicago Blackhawks, not qualifying for the NHL (National Hockey League) postseason presented the opportunity to pursue research interests at the opposite end of the world. The Blackhawks are part of ice hockey’s Original Six teams, and one of the most successful franchises of the recent era. Following three Stanley Cups between 2010 and 2015, recent seasons haven’t quite reached the same heights, and the organisation has been relegated to playoff spectators.

The break in schedule saw Paul arrive in Auckland to commence his doctoral research with AUT, profiling brain function in post-concussion athletes at rest and after exercise. Over the course of his career, having been involved in the rehabilitation of many athletes suffering concussion, Paul has become an advocate for a comprehensive, multi-disciplinary clearance before allowing someone to return to sport. “Most baseline assessments of brain function have all been derived in medical terms,” he tells. “You could have someone stay sedentary and then test them, and clinically it seems like they’re better. You don’t really know until that athlete starts to undergo bouts of exercise at different levels of intensity, or different elevations. Not taking into consideration the effects of activity on brain rehabilitation seems to be naïve as to how influential that piece of the puzzle can be.” Being tested athletically confirms to both the athlete and the staff that they’ve recovered, and adds security when the player returns to competitive action. “An athlete knows they’ve been tested in an environment that they’re going to be competing in, with certain work-to-rest ratios, and the types of movement patterns they’ll be performing on the field of play,” Paul explains. His PhD research will compare if and how concussed athletes differ in their responses to specific tests at rest, and after undertaking a series of movement and exercise-based activities.

One of the most difficult aspects of treating a concussion is one of the most intriguing for Paul. “Everybody’s recovery from a concussion is unique,” he says. “With a shoulder labral reconstruction or an ACL injury, while there are individual nuances, there’s a similar timeframe and you know the process to return to play. For someone with a concussion, you have no idea. You have to be open to listening and thinking with the individual, and taking into account how they respond emotionally, physically and mentally.” He’s adamant that both clinical and physical assessments can, and should, co-exist. “It can’t just come down to a computer saying a player is okay,” he says. “Ultimately, it’s people like me who are on the floor, actively in the player’s rehabilitation, doing the diagnostics, getting the measurements, seeing the physical and verbal responses to the activity. The process needs to be more holistic.” He has support from his Blackhawks medical colleagues, where a player returning from concussion must undergo a sequential four-step process – ocular motor (eye function), exercise exertion, neuropsychology and impact. “That process is unique to us,” he tells, “but we want to make sure that the athlete is cleared in every aspect, including exercise. I’m not trying to take away from the medical assessments, I’m trying to add to them. I believe the athlete needs to be aware of how important it is to be cleared on all levels at different stages of their recovery.”

A strong part of the attraction of studying at AUT was the reputation of Professor Patria Hume, who is a leader in concussions and brain health. Following a Skype session with Patria, Paul knew the open, collaborative and technology-focused environment of SPRINZ (Sports Performance Research Institute New Zealand), based at AUT Millennium, was the most appropriate place to conduct his concussion investigations. “After researching Patria’s background, and talking with her, I knew she would be the right person to supervise my PhD,” he recalls. “I don’t need someone to tell me I’m right or wrong, I need someone who is going to challenge me along the way. I find that really refreshing.”

Patria, who has supervised over 60 postgraduate students, says it was Paul’s enthusiasm and resilience which stood out for her. “I was impressed with him after our first Skype meeting,” she tells. “His excitement for the area, his willingness to step outside strength and conditioning and look at multidisciplinary aspects, and also his approach. This is a logistically-challenging as well as intellectually-challenging PhD, and Paul has the resilience to cope. Both as a remotely-supervised student and being able to respond to challenges, because research is never straight forward.”

Working together over Paul’s short stay in Auckland gave the pair chance to compare how concussions are managed in ice hockey and rugby. In the NHL, each player undergoes a baseline cognitive test at the start of each season, recording important functions like memory, concentration, language and reasoning. These then serve as the benchmark for any tests following a concussion. “When an athlete suffers a suspected incident, they immediately enter the concussion protocol,” Paul explains. “They are pulled off the ice and are sent to a quiet room under the supervision of a doctor or athletic trainer. If symptomology subsides, they must pass the SCAT5 test (Sport Concussion Assessment Tool, version 5) before returning to play.” The League also provides independent spotters, who have a direct line to each team’s medical staff to advise them of incidents and players who must enter the protocol.

By contrast, baseline testing is not compulsory in any of New Zealand’s leading sports. Patria is a lead researcher in the Global Rugby Health Research Programme which has investigated cognitive functioning in rugby players from New Zealand, the UK, Canada and Australia, so she is familiar with concussion protocols within the game. “Sports follow our national ACC concussion guidelines, which include the SCAT5. Rugby is different in the time to return to play from other sports. At the elite level, they have the HIA (Head Injury Assessment) process, where a player can go off and have ten minutes to be assessed by a medical doctor. If they pass that assessment, they’re allowed to return to the field.”

In both sports, the medical professionals in charge of clearing a player from concussion are staff from within that team’s organisation, which can be problematic. “Doctors have reported that the athletes pressure them to be cleared. Because their brain has been damaged, they are not thinking clearly, so they can’t make good decisions for themselves,” Patria says. “Some coaches pressure the medical staff too. The stage of the competition cycle the team is in can influence decisions regarding the next steps for the athletes and their injury management and time to return to sport.” Paul agrees that the high stakes of professional sport play a role in both the number of concussions seen in sports and how they are treated. “Hockey is so much faster now, and while there have been rule changes, things are always going to happen with the sheer magnitude of the velocity these athletes are travelling at.” Given the high stakes of wins and losses and securing contracts, some players are understandably anxious to return as quick as possible. Paul chooses not to assume the responsibility of those pressures, and he’s pleased to know players have become less resistant to the process. “The difference is that we’re now much more aware and sensitive to the severity of head injuries, so athletes in turn are more intelligent in understanding that we’re looking after their long-term health and safety.”

It’s all about balance

As he returns to the States following his initial PhD presentation, things won’t slow down for Paul. In Chicago, he is responsible for designing and implementing exercise programmes for the Blackhawks players, the organisation’s two affiliate teams, Rockford Icehogs and Indy Fuel, and any recruits or prospects playing around the world. Now that it’s off-season, players can choose to train under Paul’s guidance of their own volition. “Nothing is mandatory in the off-season,” he says. “Some athletes stay in Chicago and I get to see them in the gym every day, whereas others go home and I’m having Skype conversations with people in Sweden, Czech, Slovakia or Russia. It’s the same process, but all via satellite.” In chatting with Paul, one thing which comes through strongly is his dedication to the athlete’s best interests. “Of course you want to facilitate the ‘stars’ of the organisation, but I want to be the best I can for every athlete. You never know if the person who is not even on the roster could help us win down the road.”

Doctoral research is no small undertaking, and with a high-travel job, Paul’s looking forward to finding the balance between the two. “It will be a matter of what I’ve got time to accomplish on any given day, and having the energy to not get fatigued by either one.” While he has an approximate idea of what his research will confirm, he does know the impact he wants it to have. “In my line of work, it’s about how we can best take care of the athlete, which isn’t to say we’re not taking care of them now, but how we can do it even better. I’m hopeful that my research can have a powerful impact on the athletes I work with, as well as other people going forward.”

To find out more about Paul’s research, you can visit www.sprinz.aut.ac.nz 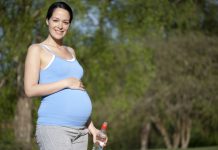 How body movement changes in pregnancy