You may remember last year, Tommo (X10 trainer) undertook a crazy running challenge. He added one kilometre to his tally each week, so by the final week of the year, he ran 52km in one session. Madness, right?

His efforts inspired a group of ladies to follow in his footsteps. Calling themselves Scrambled Legs, the group consists mostly of X10 regulars who were up for a challenge. Or so they thought. “I hate it,” says Leigh-Ann Botha, only half joking, and with an expletive for effect. “I do not enjoy it, especially now the runs have got longer. It’s a whole lot of stupidity.” Not quite as crazy as Tommo, they decided 500m weekly increments were much more manageable, and didn’t need to be completed in one effort. By the end of their 52 weeks in October, they’ll be running 26km.

The group is made up of women of all ages and stages, with varying levels of fitness. “We’ve got the exceptional few who are amazing, they’re the ones who can just run 18.5km in one go,” marvels Leigh-Ann. “It’s not normal. The rest of us are now breaking the distance up over a couple runs each week.” There’s a group chat for accountability, where the ladies post pictures of their running app or treadmill screen as evidence, which is met with encouragement and celebration.

Tommo’s proud of the efforts the ladies are putting in. “These awesome ladies are from all walks of life, and are so far nailing it!” he says. “There are some self-proclaimed haters of running, but with the encouragement of the other girls, they have overcome that, and their fitness levels have improved dramatically.” Some of the group supported him through some of his longer runs last year, putting in a shift on a treadmill beside him. “Some people have the perception that Personal Trainers inspire, and in some cases, that’s true,” he says. “For me, it’s always clients who inspire me, and the girls doing this running challenge is no different.”

Despite her dislike of running, Leigh-Ann acknowledges it’s good for her. “I can see the difference in my fitness and the speeds that I’m running,” she says. “I was never good at running, but honestly, it’s such a mental game. Some days, it’s just not happening… I tried after drinking too much, definitely not happening!” She credits the support from others for helping her get out and tackle the kilometres, despite detesting the thought. “X10 is a really encouraging atmosphere, I love the laughs and the people,” she says. “Everyone tells you how amazing you are when you finish, and you think ‘‘Yeah, I am amazing!’ But I’m definitely not made for running, I don’t enjoy it, even over halfway through our challenge.”

Taking a break from self-deprecation, Leigh-Ann is full of praise for Tommo’s impact on the group, and X10 members in general. “I like to give him a lot of flack, but he’s so good for all of us, encouraging but not pushing,” she tells. “He knows what everyone is capable of. When I started running, really slowly, he was always there, telling me not to stop. In fact, he tells me to run faster!” She laughs when thinking of the stirring Tommo is doing in X10 sessions. “You’d think he would decrease the amount of running he makes us do, knowing that we’re doing this challenge on top of our regular sessions. Nope – he’s like ‘you guys are getting better, you can handle it.’ Thanks, Tommo!”

Despite her dislike of running, what Leigh-Ann really enjoys is the camaraderie in the group. “I need to thank the girls and Tommo for the laughs, encouragement and help,” she says, genuinely. “There have been some testing times, but overall it is something I’m very proud of being involved with these amazing people!” The group are already discussing what their next challenge will be, with bike-based work being the leading candidate at this stage. Leigh-Ann’s counting down, and already has grand plans for the 26km celebration. “We’ll all get together for loads of wine and delicious food – there better be a huge celebration!”

Tommo’s advice for the ladies as they start hitting the big numbers? “Hydrate, don’t look at the numbers on the screen too often, and just keep running! I’m proud of you all – remember it’s supposed to be hard, otherwise it isn’t a challenge!”

We’ll check in with the Scrambled Legs a couple of times between now and October to see how they’re getting on with their challenge. If you see the ladies around the Gym, be sure to give them plenty of encouragement!

Find out more about Tommo and X10 Group Training on our website. 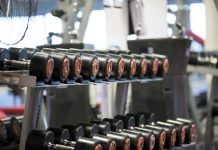 Weight training and cardio – together or separate?

How to survive exercising in winter