In the last blog, you may remember that I took you on a trip to your muscles, showing you what they are made of and how they work. While we only covered the surface level detail of the muscles, I want to divert slightly and take you on our next trip, where we will touch on your nerves and their systems. Central Nervous System
The central nervous system consists of the brain and spinal cord. Their job is to integrate information coming back from the peripheral nervous system and to respond automatically or make decisions on actions that should be taken. You can think of the CNS as the ‘head office’ of the body. It works consciously and subconsciously to control all activities within the body. The brain is organised into areas responsible for processing information, making decisions and then carrying out the appropriate task such as maintaining homeostasis, interpreting sensory information, creating motor responses (movement), learning, thinking, talking. The spinal cord provides an ascending pathway for sensory information travelling from sensory receptors in the body up to the brain and a descending pathway for motor information travelling from the brain to the motor units. The spinal cord also acts as a switchboard for reflexes or movements requiring speed. With reflexes, motor responses (movements) are initiated at the spinal cord rather than the brain. Withdrawal and jerk are the most common types of reflexes.

Peripheral Nervous System
The peripheral nervous system consists of 12 pairs of cranial nerves and 31 pairs of spinal nerves. The spinal nerves, divided into plexuses (networks of peripheral nerves), innervate (stimulate) the muscle to create movement. As noted earlier, sensory and motor neurons are in this system. The sensory division provides information on what is happening within and outside the body. The senses include hearing, sight, touch, and proprioception

Nervous System and Exercise
The nervous system and fitness go hand in hand. For example, when learning a new movement, you may find that the movement is quite awkward and difficult at first. This is because their nervous system is trying to learn something new. However, the more they repeat and refine the same movement, the more efficient and smoother it becomes until it is second nature. A lot of the initial gains in strength will come from improvements in the nervous system as it learns new movement patterns and becomes more efficient at doing its job.

Conclusion
I think with all this terminology I have touched a nerve, and hopefully, it will help you remember something new you might have learnt from our trip into your nervous system. As you can see, the nervous system is as crucial as anything else in our body. Well, I would say it is the most crucial part of our body as it controls everything we do. Again, I will conclude with this statement, I believe we sometimes take our body for granted, but when you read more into it, I know for me and hopefully for you as well, a newfound level of respect for our body is developed. 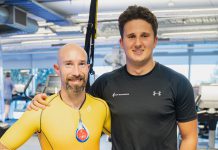