Jodie Rawle has worked at the AUT Millennium Speedo Shop since 2011, but it’s the time spent here by her family that spurred her decision to sponsor a seat in the National Aquatic Centre. “My girls have been coming here for swimming lessons and sports for so long,” Jodie says. “Tahlia, who’s now 19, started here in 2007 and then Brooke (15) started in 2010. They’ve been involved with North Harbour Water Polo and Mairangi Bay Surf Lifesaving, and Tahlia has been a swimming teacher here for over three years, so we’ve always been coming to AUT Millennium.”

When the National Aquatic Centre was set to open in 2015, the call went out giving the AUT Millennium community the chance to contribute to the development of our facilities and assist the next generation of athletes by way of a $250 donation. In return, the sponsorship would be acknowledged by a plaque on their chosen seat in the National Aquatic Centre’s grandstand. The plaque could be engraved with their name, the name of a loved one, or the name of a business. Jodie chose to have the family name on their seat. “Working here and watching the NAC being built, I just thought it’d be really cool to recognise the fact that we’ve been coming here for so long, and how much the facility has been a part of our lives. That’s why it’s Rawle Family, it’s not just one person,” explains Jodie.

Former representative swimmer Jacob Garrod says receiving the AUT Millennium Scholarship helped him to progress as a sportsman and realise his potential. “AUT Millennium has helped me to grow as an athlete by providing me with access to a gym, two pools, physio and doctors when needed. The facilities on offer are definitely some of the best in the country, which has helped me to achieve my goals,” he says. Jacob went on to compete at two Oceania Championships, the 2014 Youth Olympic Games, and the 2017 World University Games. “AUT Millennium was able to assist in funding my international trips, which are largely user-pays, by providing travel grants,” Jacob explains. The Scholarship Programme was founded in 2005 and supports between 50 – 80 athletes each year.

For Jodie, it was AUT Millennium’s personal connection to her daughters that compelled her to sponsor a seat. “They’ve swum here so much, and we’ve been to so many water polo games over the years that we feel like it is a major part of our lives,” she says. She recalls a stage when AUT Millennium was her most-visited destination. “I used to drive here about five times a day. Getting up in the morning at five, driving Tahlia to training, coming back to pick her up, me coming to work, coming back in the afternoon for Brooke’s swimming lesson, and then bringing Tahlia back for water polo at night. Luckily I only live five minutes away!” She believes many families will be able to relate, particularly those with children who love the water. “Any pool-based sport, you end up here. Whether it’s surf lifesaving or water polo,” tells Jodie.

To this day, Jodie is still happy with her choice to sponsor a seat. “It’s nice,” she says. “It’s not on your conscience all the time, but if we’ve got an event at the NAC we’ll try and sit in our seat. It’s in the centre on the aisle with a drink holder.” When asked whether her donation was a worthwhile investment, Jodie notes “Absolutely, it feels good that we have contributed and are a part of NAC history. Especially if you use the facility and your kids have used it. It’s like a donation or a way of saying thank you for giving us the opportunity to swim in such a great facility. It’s been such a part of our life for so many years.”

If you would like to know more about how to sponsor a seat, please email [email protected] 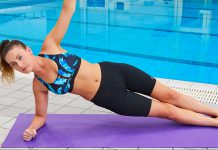