It’s 7.30am on a Wednesday morning, and Jack Atkinson is perky and cracking jokes. To others struggling to move out of first gear and desperate for a caffeine hit, it seems like he’s taken a magical substance. But his own morning struggle happens when he shows up for Running Group at 6am.

“I don’t even know my own name at that time of the morning,” he laughs. “But it helps that there’s a family attitude within the group. It doesn’t matter what level your running is at, you’re all there together at stupid o’clock in the morning to run, so you’re part of the group.”

Since recommitting to running six months ago, Jack has achieved incredible results, not just in his running ability, but in his overall health and wellness. “I’ve lost 14kg in the last six months,” he tells with a smile. “I’ve also quit smoking, after having smoked since I was 14 years old. I really feel amazing!” With three children under five, he’s found his energy levels are higher and is proud of the example he’s setting for them. “Now, instead of having to go outside and hide smoking from them, they see me going out for a run. It’s great that from such a young age, they’re going to associate exercise and fitness to something the whole family does.”

Having a goal has always spurred Jack. Originally from the U.K., he first got into running after an injury ruled out his preferred sport of kayaking. “I joined the police, and found that with the crazy shifts, I was often eating kebabs at 3am because that’s all that was open,” he recalls. “I had an injury and wasn’t exercising, and I just became a pork pie. I put on a lot of weight after being so fit while kayaking.” He knew he needed something to work towards to keep him motivated, so in 2011, he signed up for a marathon. “I trained for it, and managed to complete it despite tearing a load of muscles in my leg. I had to walk the last few miles which pushed my time out to 5 hours 17mins.” Happy to have completed the 42km, but without another goal, Jack fell back into his old ways. The takeaways and bad habits crept back in, and following his emigration to New Zealand, he knew he needed another health kick. “I was struggling to keep up with the kids, and I needed a nap during the day or I’d just be a zombie.”

With a 9-5 role at WorkSafe bringing more structure to his routine, he joined AUT Millennium Gym and started his journey back to running. He discovered the Monday and Wednesday morning Running Group, but found the concept quite daunting. “I was coming from nothing again, and I thought that the group would be all elite runners,” Jack laughs. “I actually trained on my own for three months before I joined because I wanted to make sure I could at least run a mile!” He soon learned that his concerns were not warranted at all. “Everyone was so welcoming,” he recalls. “They don’t care what level you’re at, everyone has their own goals and runs at their own pace.” The group makes a habit of meeting in the café following the running session, knowing they’ve worked hard and earned their coffee.

The group’s support helped propel Jack back into running, and having recently completed a half marathon, he’s set his sights on the Auckland Marathon in October, and beyond. “I know I need a goal, so following the marathon, I’m going to train for my first Ironman, hopefully in 2021,” he says. “I really want to be able to tick it off the list, so I’ve given myself a lot of time to train properly, to be realistic.” 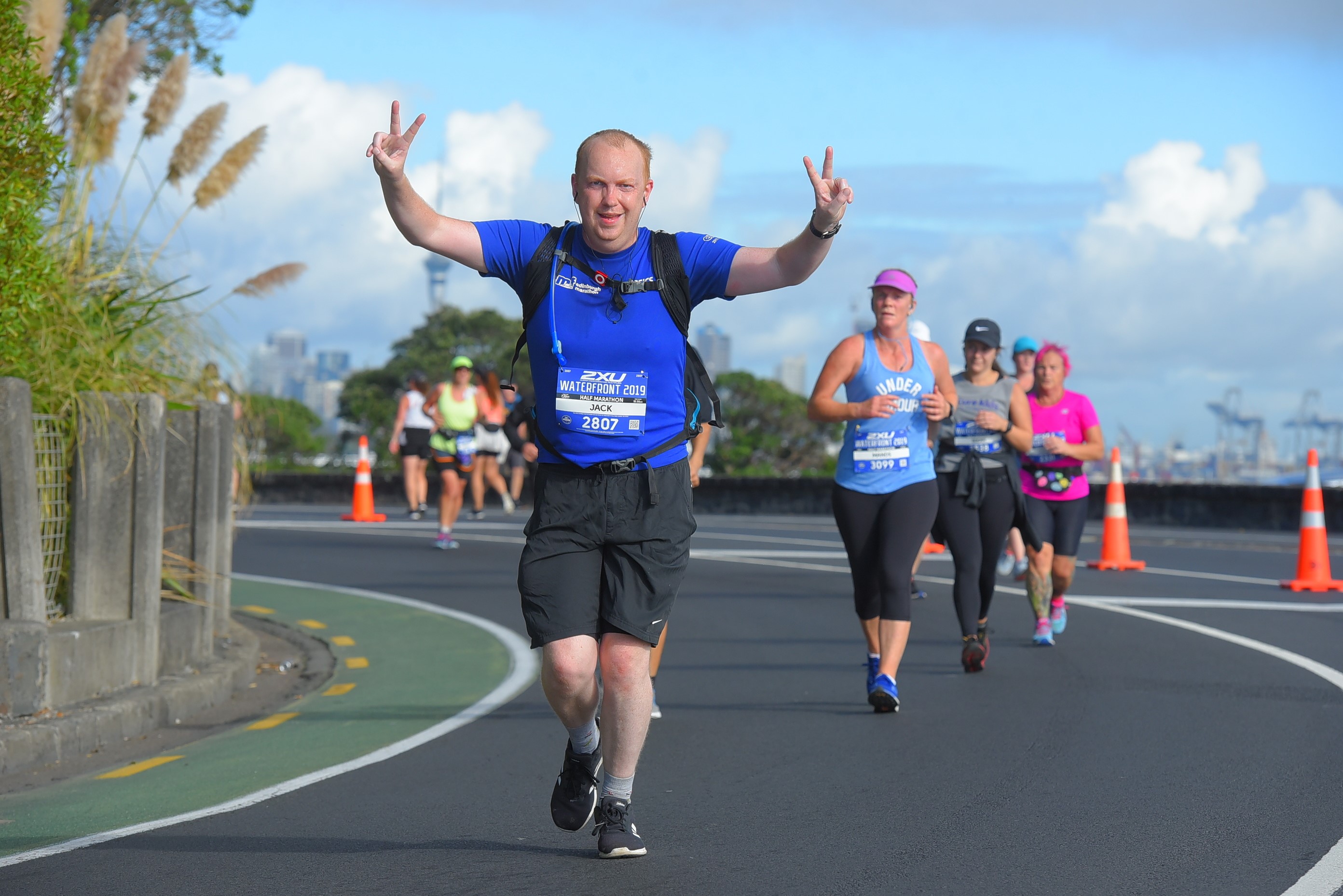 With a bike on his Christmas wish list, Jack’s already putting in work on his swimming. He has become a regular at Adult Swim Squad lunchtime sessions, honing his technique in preparation for the 3.8km Ironman swim leg. “It takes so long to improve your stroke, I’m not suddenly going to be an Olympian,” he laughs. “I’ve even managed to convince my boss to join in with me, and we encourage each other to come along. It also means I have permission to go swimming each lunchtime!”

Jack’s schedule now looks completely different than when he first came to New Zealand. Every Monday and Wednesday morning, he’s running laps with Running Group. On both of those days, he’s back at AUT Millennium at lunchtime for Adult Swim Squad. Thursday and Friday consist of his own runs, suited to his training schedule, which often includes a longer run over the weekends. Strength and conditioning is taken care of during Running Group sessions, where coach Kiri Price dedicates time to bodyweight resistance work. “Kiri is fantastic,” Jack says enthusiastically. “I can’t speak highly enough of her – she’s so helpful, so knowledgeable.”

Jack’s advice for those who might need some motivation to boost their health and fitness? Just start. “It all comes together naturally,” he says. “I’ve gone from eating rubbish and smoking, not really caring about my body, to having to eat healthy at the right intervals, because I actually want to do it now,” he says. “I need that energy and I want my body to be the best it can be for my long runs.”

Difference between good and great