After representing North Harbour Bays and Auckland throughout the summer athletics season, distance runner Lydia O’Donnell headed to America to take on the fifth edition of The Speed Project: an ultra-relay from the Santa Monica Pier to the iconic Las Vegas sign.

We asked Lydia, an AUT Millennium Scholarship Athlete, about the experience and found out about her running journey so far.

You recently competed in the 2019 Speed Project in the U.S. Tell us about your relay team, the race, and how you got involved?

The Speed Project (TSP) is one of the craziest things I have ever done. You run from Los Angeles to Las Vegas, covering around 550km, with no rules. There is no set route – just get to Vegas on foot as fast as you can. The race is like no other and really pushes you mentally and physically to your limits. I have run TSP twice, in 2018 and 2019. Both were totally different experiences. In 2018 I ran with an Australian-based running crew called Hunter Athletics, and this year I joined an international team representing Tempo Journal – a running media channel. We raced with a six-woman team, and placed third overall and were the first all-female team. We broke the record by over seven hours. It is a tactical race, and doesn’t just come down to the running – which is an aspect I love. You have to be smart as to how you break up the race and the route you take. It really opens your eyes up to the world outside of the typical competitive running world and puts an entire spin on how you approach the sport. I love competing on the world stage, but lacing up with a team to achieve such an insane goal gives you even more respect for athletics and running.

Two weeks before TSP, you won gold in the 5,000m at the New Zealand Track & Field Championships, and three weeks before that you won the national 10,000m title. What are the differences in your preparation heading into different types of races and how does your body handle the demands of competing in events in quick succession?

My focus over summer was on the track and I know that working on my speed and improving my times in the shorter races is only going to help with the longer distances in the future. I managed to run a PB in both the 10,000m and 5,000m, and I believe the work I put into the track definitely carried through to TSP. Even when I am running track, I am still running relatively high mileage, it is just the sort of runner I am. Heading into TSP I had to complete a few longer endurance workouts, but the speed from track and aerobic fitness from the mileage I run worked well to get me through the 96km I ran for TSP. My average pace was around 3:50 per kilometre, which I wouldn’t have thought was possible before the race, but somehow when you are in a team you get carried through.

In 2016 you launched the One Step running group. Tell us about the purpose of One Step and how it came about?

One Step arose to create awareness for mental illness and to educate the public on how important movement is for anxiety and depression. The idea came from a similar minded group called One Wave – in which they spread the message of how surfing can have positive impacts on mental health. I am a huge believer that movement is medicine for the mind, and have seen first-hand the impacts that running can have on the perspective people have on life. We started our community in Auckland with a group that gets together once a week to run. Not to run fast, or to break PBs, just to run. We run laps, we talk and we open up to one another. We now have 15 communities across the world and are kicking off in new towns every few weeks. It is awesome to bring people together who have suffered or are suffering, and give them hope. I find running provides an easier way to connect to one another, and being part of a community helps you feel a sense of purpose.

What does a typical week look like for you in terms of your training schedule and working towards becoming the best athlete you can be?

I am really lucky in the sense I look after my own hours and I work for myself. I am able to prioritise my training and let my work fit into my life as an athlete. I am currently in training for my next marathon, so the mileage is ramping up. I am running about 100 mile (160km) weeks, with double runs most days. I do one speed session a week, one day of strides, and one longer run that is sometimes broken up into intervals. My other days are either steady or easy runs. I am in the gym about three times a week. I get into the gym as much as I can. Strength training is super important as a long distance runner. Building muscle makes you stronger and faster, but also helps to prevent injuries. When you are running 160km on the road each week, it can be difficult to manage but definitely a priority.

You’ve competed in track events and marathons regionally, nationally and internationally. What has been the highlight of your running career so far, and what events are you working towards in the future?

I guess I have a few highlights! The Speed Project was definitely the most memorable race as it tests you like no other. But running the New York Marathon in 2018 for Movember, the men’s health charity, was a huge moment for me. NYC Marathon is one of the major marathons and the support on the course was insane. It was like the entire city came out for us and I have never heard cheering so loud in my life. Running through the streets of Brooklyn and through the five boroughs of the city was so interesting, the race is a tour of NYC. I ended up in 20th place, and although it was far from the time I was wanting to run, I was really proud of what I achieved on that day.

Who have been the biggest role models and influences on your running career, and what advice do you have for other runners and young athletes?

The biggest influence I have had to date was my first running coach I had at high school. Rose Wright, taught me how to love the sport, to run for the passion and make sure that is the priority. I was so lucky to be told to be patient and to not over-train as a young athlete. Throughout my running career I have seen so many athletes break from too much training too young. I didn’t start seriously training until I was 20. I am so thankful for Rose and give her full credit as to why I am still running now. It takes years to condition yourself to running high mileage. And this message is the first one I give to any young athlete wanting to get into the sport. Create your love for running first. Run for the fun of it, not to be the best. Be patient with your training and understand that gradual progress and sustainable running will bring you success in the future. Plus it will make you actually enjoy the sport. And if you love it, you will want to do it forever.

What would you tell the members of our AUT Millennium community who are interested in taking running more seriously?

To stay motivated to run, set yourself some running-specific goals. Give yourself time and be patient with your training. It is important with your programming that you have a mixture of workouts throughout the week that focus on speed, strength and endurance. Rest and recovery is a key part of running too, so make sure you are getting enough.

If you allow yourself the time to focus on your goal and have an educated input into your running programme you will not only improve your PBs, but you will enjoy the training even more.

To keep up-to-date with Lydia and find out about her personalised running plans, head to lydiaodonnell.com. 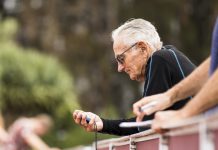 How to start running

3 features of a good runner