Going into a training camp is always exciting, although I know that at the end of it I will be exhausted and sore but hey, it’s what I signed up for and it’s what I love.

Last week’s camp was exactly that and more, meeting new team mates, learning from the professionals, having meals prepared for me and training hard and hitting the numbers set by my coach.

Most days we had a 7am breakfast, followed by a training session and then a seminar or two, some downtime and then more training.

We were lucky enough to have professionals like Eric Helms (Nutrition) Peter Lee (Physio) and David Neithe (Mental coach) come into our camp to up skill and inform us on the ways that we can be better and allow ourselves to achieve whatever we set out to do.

Friday night was our big ‘max out’ session, the atmosphere was amazing and big numbers were being hit by all the athletes.

Being surrounded by this is just amazing! Nobody wants to be left behind so everyone picked up their game, it was amazing.

Now that the training camp has finished I turn my focus to the Oceania Championships which will be in May in Fiji. Not only is it a championship event but it is also our Olympic Games Qualifier, my final chance of achieving a spot for my first Olympic games.

In order to qualify, the New Zealand women’s team first have to earn a ‘Olympic Games spot’ by finishing in the top four countries at the Oceania Championships.

The competition is often filled with drama and a certain depth of character is needed.

On one hand you’re performing selfishly to gain an Olympic spot and on the other, you must deliver for your team-mates.

If that’s achieved, a nomination is made to the New Zealand Olympic Committee and the selectors must be convinced the athlete is capable of a top-16 finish.

On the 28th of May I will know if New Zealand has gained female spot, after that there will be an anxious wait to hear back from the NZ Olympic committee. Until then I will continue to train hard and focus on the process and not the outcome!

Next time you hear from me we will know the outcome from the Championships and the Olympic spot on the line. If you would like to follow my progress, like my athlete page where I give regular updates. 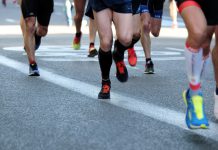