We all go through periods in time where priorities may switch. Family, friends and work are common priorities that can stop us from coming to the gym or working on our health and wellbeing, which is completely ok. If you are working towards a specific goal, taking extended periods of time off is not ideal, but if it is necessary, then it just has to be done. The question that everyone wants an answer to, and I myself want to know, is how long can we take off training before we start losing progress (detraining)?

The book “Psychology of Sport and Exercise” states that muscle atrophy “wasting” can begin within a 2-6 week window of not working out. There are however a variety of variables that must be taken into account when putting a time on the atrophy process. Age is a significant variable, with changes relating to the nervous system being a key. As we get older we begin to lose motor neurons. A study by Aagaard (2010) suggests there is a dramatic decrease between ages 60–70. Motor neurons transmit impulses from our spinal cord that tell our muscles to contract. When you lose motor neurons, it becomes harder to recruit muscle fibres, and if you can’t recruit muscle fibres, then the fibres won’t be able to break down during a workout and rebuild to grow back bigger and stronger. Other variables include hormone status, if you’re sick, if you’re a person with chronic medical issues, and of course, diet and your training regimen.

Here’s a generalised example. You normally come to the gym 4-5 times per week and that mainly consists of lifting weights, but for the next four weeks you have to travel for work three days a week, and it’s school holiday time (parents out there I’m sure you all love this time). This will force you to have to change your training. What we usually do (and what I have done in the past) is during these busy times, the gym and working out become the first thing we drop. Here’s something I had to learn and have come to understand a little more – any workout is better than no workout! Personally, I find it hard to work out if I know that it won’t be as long or as intense as usual, but even if for the next four weeks you come in twice a week for only 30 minutes, that is better than nothing. You may see a slight drop in your current performance, or even better, maintain performance, but again it is better than taking four weeks off the gym all together.

You won’t see improvements in your performance, but I can tell you it will be much easier to return to your normal training regime. All that work you have done before taking a break won’t go to waste because it will allow you to rebuild strength, muscle, fitness etc much quicker.

How long is too long off doing cardio?
Let’s talk about the detraining effects on your cardio fitness (aerobic conditioning). A study conducted by Ready, Quinely (1982) looked at the rise and fall in aerobic conditioning in a group of well-trained men who followed a cycling training programme for nine weeks, then rested for nine weeks. At the conclusion of the first nine weeks, on average the men increased there V02 (volume of oxygen consumed) by 40%. After the first three weeks of detraining, V02 decreased by 20%.  Before you panic, at the conclusion of the nine-week detraining period, the men were still able to maintain around 40% of their gain in aerobic conditioning compared to their fitness levels prior to the study.

Another study conducted by (Edward Coyle et al) concluded what I think we all know – the better trained and more experienced we are the less fitness we lose compared to someone who is more sedentary or only recently starting exercising. Similar to weights training, if for the majority of your time and experience with aerobic training you have followed and maintained a good training regime, then when you do need to take time off, the years of work you have done prior to the break is not wasted and won’t all of a sudden be lost.

Here’s why… By taking time off you are likely to lose a large position of initial gains made prior to the break which include: decrease in enzyme levels, glycogen storage decrease and decrease in muscular efficiency, which affect the body’s ability to perform aerobic exercise more than the core cardiovascular “engine”.

Conclusion
What’s the answer to our question “How long can we take off training before we start losing progress?” The general consensus is between 2-4 weeks. It is important we remember the progress “lost” is only the initial improvements made before the time of taking a break, and the long term progress we have made over the course of six months, 12 months, 18 months etc is not lost. So if you go on holiday, enjoy the holiday! If you have got to put work and family before the gym cause it’s a busy time, then do it without thinking of the gym and progress you may lose – when you come back, it will come back with you. 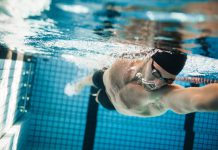 In the Gym to Swim