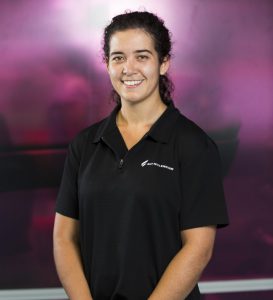 There’s conflicting emotions in the Gym team this month with the news that Mel Kerr is moving on from her role as a Gym Instructor. Of course, losing a well-liked, friendly staff member is never enjoyable, but that disappointment is tempered by the excitement for Mel starting her new role. Mel is taking a software engineering internship with Air New Zealand towards the end of November, which she is very keen to start after completing a Bachelor of Arts/Bachelor of Science conjoint degree, majoring in Computer Science.

Mel’s been part of the team since February this year, but has been a regular in the Gym for much longer. “I was part of the Long Term Athlete Development programme as a teenager (now known as AD), and then came to join the Gym with my mum when I was about 16,” Mel recalls. “I loved it, I was hooked. Missy was my personal trainer for a while, and then we tried out X10.”

Mel loved X10 group training so much that she undertook two fitness qualifications at the same time as her university study so she could work alongside founder and lead trainer Tommo (Thomas Henderson). “It was a bit weird going from training alongside members, to training them and talking to them as a staff member,” Mel laughs. “But it was an easy transition, because the people I work with are great, and our members are awesome. I’ve really enjoyed it.”

We talk of our Gym members being Everyday Champions, but you may not know that Mel really is a champion. Six years ago, in her early 20s, Mel was diagnosed with Stage 4 Hodgkin’s Lymphoma, the worst possible stage of the blood cancer. With cancer in her neck, chest and hips, Mel undertook treatment, and thankfully was cleared after six months. She credits being fit and healthy prior to her diagnosis as a factor in helping her overcome the disease, and the experience gave her some perspective on wellness she otherwise wouldn’t have. “My attitude now is about enjoying life,” she says. “I enjoy coming to the gym and working out, and I eat pretty well during the week, but I’ll still have a burger on the weekends if I want one!”

During her treatment, Mel received great support from the AUT Millennium Gym community. As well as posters around the Gym encouraging her, the X10 crew arranged a challenging fundraising event. “They ran up the Kennedy Park Stairs as many times as it would take to climb Mt Everest,” she recalls. “Those stairs are horrible, and they did it something like 50 times. That was massive, and meant so much to me.”

Even though she’ll now be working in town, Mel’s adamant we’ll still see her around the Gym. “This place is like a second home for me,” she says with a smile. “Even more so now I’ve worked here. I couldn’t go to another Gym. I think that if I left, I’d definitely be bombarded with messages to come back!”

Gym Manager Sam is sad to be losing Mel as a member of her team. “Losing Mel is bittersweet,” Sam says. “We are really excited she’s been given such an awesome opportunity straight out of university, but it will be a big loss to our team. She has an irreplaceable energy, she’s positive, intuitive, bubbly and very handy with a dust buster!” There’s comfort in the fact Mel will still be seen around the Gym. “We’ll still see her smile most days – yes, she’s still smiling when she’s training hard! Mel has such a bright future ahead of her and I know she will absolutely nail her new career in software development.”

Mel’s parting words as an employee is a call to action for our members. “Our team want to help you reach your goals, so if you want to know anything, or would like a new programme or be taken through an exercise, just chat to us. Please come and tell us what it is you need!” she says.

From all of her colleagues across AUT Millennium, and on behalf of our Everyday Champions, we wish Mel well for her new role. We’re so glad you’re going to stay part of our Gym family!